As featured in CryptoNews.com, FXEmpire.com, FXStreet.com and more

The bitcoin business has developed close ties to many different global industries during the last ten years. None, though, were as excited about it as the gaming sector. One of the earliest instances of this was the app CryptoKitties, which took off on the Ethereum network.

Since then, there has been significant growth in the cryptocurrency market. The development of sophisticated products has expanded as a result of the introduction of numerous new technologies, including DeFi and NFTs. One of these is the development of Battle Infinity, a virtual battlefield.

More than 2.5 billion individuals worldwide play games today in some capacity. Online multiplayer games are the most popular type. People are now playing more video games on virtual worlds as a result of the pandemic. By 2025, it is predicted that the gaming business would generate a total revenue of $256 billion. Up until 2024, the gaming industry is anticipated to develop at a stable 12 percent annual rate.

One of the most fascinating trends in the gaming industry is the quick development and growth of the blockchain and crypto gaming businesses. Over $321 million in income was predicted to have been generated by the gaming sector in 2020. The market value of all gaming tokens increased dramatically in 2021.

The exact amount of money that cryptocurrency gaming will bring in in 2021 is difficult to predict, but it is generally accepted that it will be in the neighborhood of $1 billion. According to the market capitalization of the top five cryptocurrencies, it is predicted that the gaming sector would generate about $25 billion in income by 2021.

The economics of video games have typically been a one-way track. Players typically purchase games first, and then they spend money on in-game stuff. However, the conventional approach is beginning to alter with the rise of blockchain technology and cryptocurrency gambling. Instead of offering users a one-way ticket to the creator, the game allows them to constantly play and receive prizes.

The number of people in developing nations who are able to replace their full-time occupations by playing crypto games has dramatically increased as a result of the growth of various gaming platforms, such as Axie infinite.

Battle Infinity: What Is It?

A blockchain-based NFT P2E Platform was established by the Battle Infinity team. It can be played on practically any current browser to play P2E games.

The first NFT-based crypto gaming platform has gained a sizable following as a result of the game’s success and is on track to overtake all others in 2022 as the hottest and greatest cryptocurrency. It enables users to earn numerous virtual currencies, including coins and expensive NFTs.

The game’s developers, Battle Infinity, have created a strong product that is independent of the excitement surrounding the Web 3.0 frenzy. It is based on the time-tested principle of considering the product first. It is a wise investment because of the game’s basic concept, its amazing platform, and the team’s expertise.

If the game’s popularity increases, it will develop into one of the most safe and accommodating marketplaces in the sector.

The game aims to give players the impression that they are playing a classic RPG rather than a digital commercial. They are expected to discover its universe, develop a compelling persona, and enjoy themselves with their pals.

Additionally, the Battle Infinity Telegram channel has all the latest information. 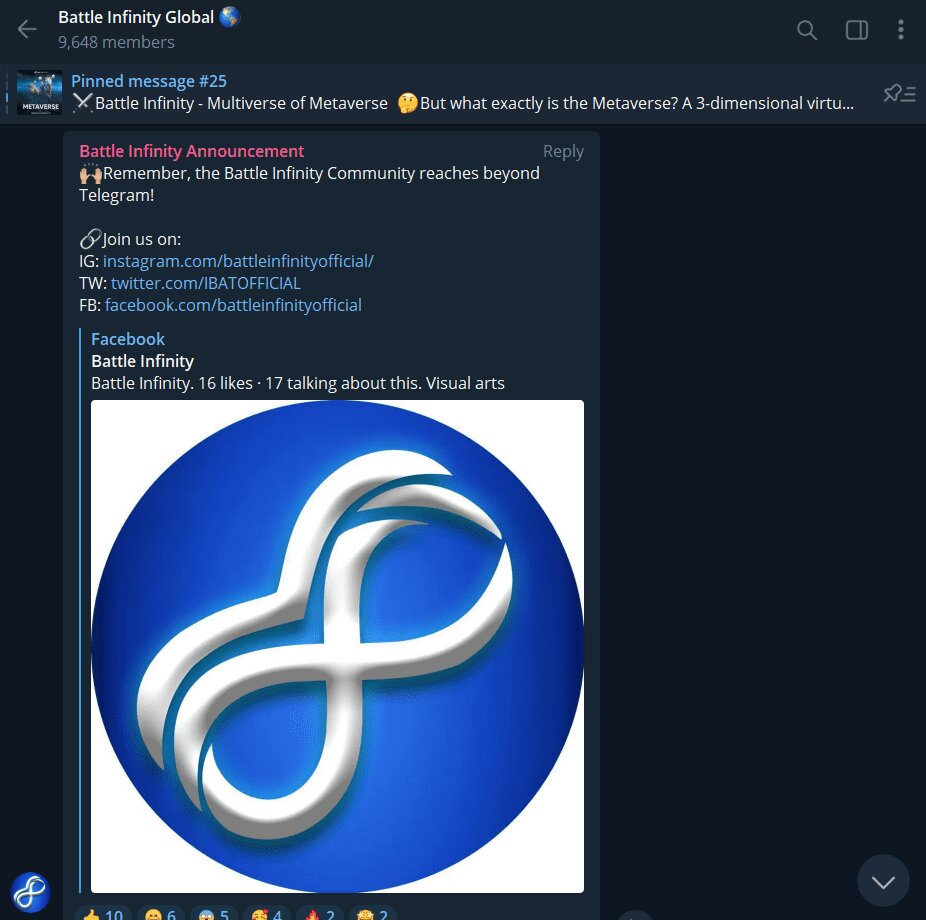 What Will Battle Infinity Do Next?

The project was extremely productive in 2021, according to the company’s roadmap, and as a result, practically all of its objectives were achieved.

Battle Infinity successfully ran its IBAT token sale in July 2022, and it has already raised more than 3,000 BNB. Since it has already stolen the show, this is a fantastic chance to join in on the fun. Additionally, you can begin your search for Axie Infinity online. Act quickly because there are only 10,000 BNB available.

The Battle Infinity token sale’s softcap has already begun. The project’s treasury now holds more than $800,000. IBAT supports the project’s tokenomic design and is a crucial component of the gameplay. Its numerous features are to blame for its ubiquity among fans of play-to-earn and the Metaverse.

The price of the IBAT token is currently $0.0015, and the token sale is still ongoing. A minimum of 0.1 Binance Coin is required for investments.

It’s reasonable to predict that investors will start including IBAT in their portfolios shortly given the stock’s rising popularity. The year 2022 is a terrific time to invest, therefore Battle Infinity is a wise pick.